Bugs or pests a problem? G.A.G. Pest Control specializes in identifying and then eliminating them. With almost 25 years in the pest control business, nothing gets by G.A.G.

Do I have Ants or Termites? How Can I Tell? 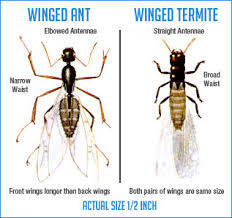 Only the termites that fly off and start new colonies get to have wings (which they use once and then throw away). Most of the termites are blind, wingless workers who often stay out of sight.

Is there ANY value in termites?

Certainly you don’t think so if they are eating wood in your house or business, but they do have their place in the eco-system.

Termites are important in nutrient recycling, habitat creation, soil formation and quality, and as food for predators.

The role of termites in hollowing timbers that provide shelter for other creatures is critical for the survival of a large number of timber-dwelling species.

Eastern subterranean termites are the most common termite found in North America. They feed on cellulose material such as the structural wood in buildings, wooden fixtures, paper, books, and cotton.

A termite colony is segmented into a caste system; the division of labor consists of reproducers, soldiers, and workers. 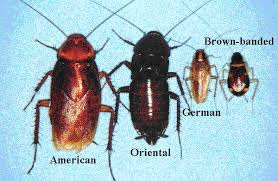 Scientists say there are 4500 specials of cockroaches in the world, but just 30 species are considered pests. However, four of those pesky species create havoc or at least heart palpitations in North America: the German, American, Australian, and Oriental cockroaches.

The German cockroach is the most common and the most prolific breeder in America. Each egg sack contains 30-40 nymphs.

The American cockroach is the largest of the pest species, often scaring people as it scurries across the floor. They don’t bite.

The Australian roaches are a bit smaller than the American cockroach but seem quite adept at randomly flying or walking along the ceiling.

The Oriental cockroaches are small and frequently found near water/wet areas such as gutters, sewers and pipes. They particularly like feeding on garbage or materials that have begun to decay. These pests, often called “water bugs,” do not have wings, are black to dark reddish-brown in color, and gain entry beneath the thresholds of doors, gaps beneath siding, or even following utility lines, pipes, open drains or sewers into a structure or home.

These wingless, grayish-blue insects are attracted to moisture, eating the mold that is produced by the moisture. They are often found in attics, basements, sinks, tubs, and showers.

While they do not transmit any disease to humans, they are truly considered a household pest because they especially eat foods and products that are high in protein, sugar, or starch. This includes foods such as flour and cereal, many kinds of fabrics, and paste or glue. Thus they can do damage to book bindings, clothing, carpets and tapestries, photographs, and other kinds of paper.

A good home remedy to use is to place DampRid in closets and bathrooms.

Let G.A.G. Pest Control take care of all your creepy crawly, scampering pests problems. Call 407-249-8111 and get those bugs and rodents under control.